You may have received a notice from Google (pictured below) that its very popular Google Translator Toolkit has been discontinued, effective December 4th, 2019. 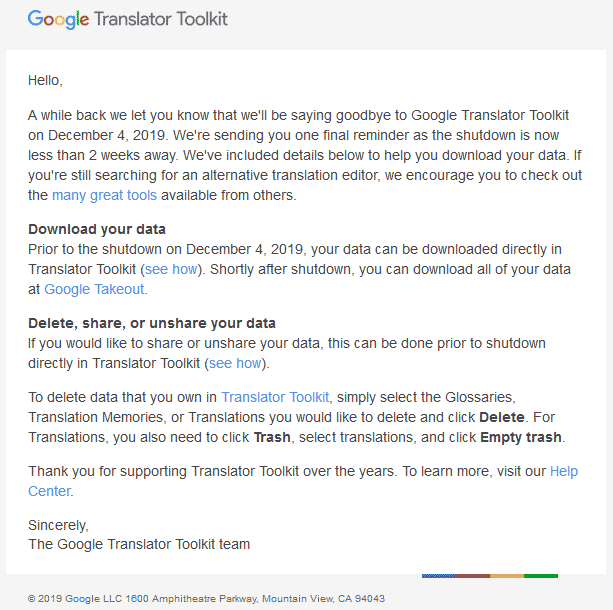 Why has Google discontinued the Google Translator?

This is not explained in the announcement, but it's not hard to see why this makes a lot of sense for Google to do. Every time  Google Translator loads on a webpage, it leverages processing power from Google's servers to start up. There's definitely a cost to making this feature available on every page of your site.

On the other hand, Google has built into its browser (Google Chrome) the ability to translate pages. This leverages the user's computer without always contacting the Google servers, thus lightening the load significantly. Since Google Chrome is available for free (and other browsers have translation add-ons) it makes a lot of sense to have people just use the browser, as is saves Google a great deal of needless processing, and doesn't depend on a webmaster to install  Google Translator for people to read foreign-language websites.

Will people still be able to see my site in their native language?

Yes. When browsing sites in Chrome, users will be prompted to view your site in their native language, as pictured below.:

Do I need to do anything to make sure my page gets translated?

No, Chrome will prompt the user automatically.

Should I do anything with the Google Translator Toolkit?

Any area which showed  Google Translator will not show anything, so anyone that didn't know it was there will not even notice it is missing. And even people that visited your site a great deal will probably not even notice that it's gone. Nevertheless, it's still a good idea to remove the old Google Translate code, as that will help your webpage load, ever so slightly faster. E-mail support@ecatholic.com if you require any help with this!

To explore other ways to serve your site's bilingual audience, head over to the blog to read Three ways to translate your website (and whether you actually need to).